It was and is a dream: the floor is suitable for it, the space is available, but … we lack green hands, we are needed elsewhere and like everyone (or almost everyone) we do not become younger over the years.

Below you will find the story of our ambitions over the past 5 years. Today, in the year 2021, we have taken a step back from earth to focus on people, on our health, which has slowed us down at times, and on the interpersonal relationships and the help we can bring. After all of this has gained in importance, the garden had to pay the price for it and survives what can: shrubs grow, but also nettles and blackberries, to a point that exceeds our consumption possibilities. The protective hedges were dismantled because the protection they offered the nettle roots, enabled them to enter the garden area unhindered. Let’s see what will come… 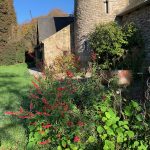 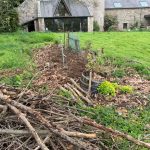 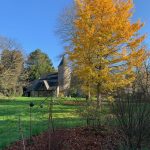 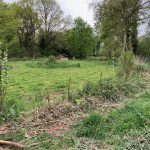 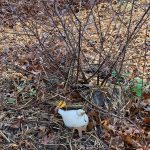 Since we switched to raw food, we have been consuming more and more fruits. If blackberries are growing all over the estate and our apple trees have already given us a small harvest, but this is not enough to meet our needs. Therefore, an appointment was made with Grégory from La Pâture es Chênes in Hénon in March 2016. According to our wishes, our availability and our experience, Grégory drew up a plan for the development of several garden areas and a new orchard. He also gives us advice on how to improve what is already there. 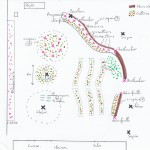 This plan is gradually being implemented and is now taking shape, even if the big harvest will not come before two or three years. In the meantime, we enjoy every raspberry, strawberry, salad and even the first zucchini and onions.

Here we tried our first permaculture test in June 2015 by simply laying hay and straw on the grass. The potatoes in the grass seem to like it – there was a small harvest. A path was drawn in the form of a double curve and gave the garden its name: the Yin-Yang garden. The first six fruit bushes were planted, then strawberries, which the birds have eaten their fill, and kohlrabi, which someone enjoyed, but not we. Cucumbers and sweet potatoes succumbed to the last frost on May 13th, which the zucchini and salads endured well. After the salads, pumpkins took the places between the fruit bushes. Zucchini, two yacons and four tomatoes were planted, as well as 80 ocas from Peru around the garden.

To the north of the Yin-Yang garden between birch and oak there is a garden with small fruit bushes. It is protected from the cold wind by a stacking hedge that recycles branches and twigs from tree cuttings (oak, linden, etc.) and provides a sheltered space for insects, hedgehogs and other animals.

In this part of the garden there are more or less well-known fruit bushes: black currants, red currants, gooseberries, but also goji, amélanchier, ragouminier, edible honeysuckle. Onions have been planted at the leading edge of the grass, and since the bushes are still small, zucchini and pumpkin cover the ground between them. After all, part of it is reserved for wild flowers: comfrey, borage and mallow. They attract pollinating insects and provide us with flowers and leaves for our salads and smoothies.

Since the birds have eaten too much of the strawberries, the structure of an old parasol now guards the beds with flying fish, dried flowers and golden ribbons. Will that work?

The circle around the gingko

The round bed around the gingko has not yet been planted this year. It is alternately given layers of grass and twigs or shavings to make a lasagna for next year’s vegetable garden.

Close to the manor, under the American oak, which was pruned in spring, herbs such as dill, tarragon, marjoram, Moroccan mint, parsley, but also rocket, sorrel spinach, daubenton cabbage, scallop plant, rocambola grow in the perpetual garden as well as onions and Bon Henri. Something to vary the salads and green pestos for our raw pizzas and lasagna.

The kid’s garden was created in June 2016. Between the start of the zip line and the trampoline, small fruit bushes are bordered by a hedge of old panels that were waiting for a new life. It will probably be a year or two before the raspberries and strawberries will bear fruit.

The new orchard was planted in an old meadow that was plowed and sown with alfalfa. In April 10 fruit trees of different heights were planted there: apple trees, pear trees and plum trees. Their foot was surrounded by grass and shavings, and three consoude surrounded each of them. The little ones were also given a circle of wild daffodils to protect them from the deer. If this proves effective and the daffodils multiply, the other trees will get some too.

The old orchard is to the east of the new one, from which it is separated by a 10 meter high strip of grass with our large cherry tree, where the birds eat their fill every year. They usually only leave us two or three cherries. It was planted 30 years ago on the edge of the forest, which has become more and more invasive. The first row of apple trees was literally swallowed up by the forest, whose trees were sending out their branches, and even overtook the second row of apple trees. The pruning of the trees in the forest is planned for this winter. In the meantime the fruit trees have received a pruning and we hope that next year peaches, plums, apples and mirabelle plums can be harvested.